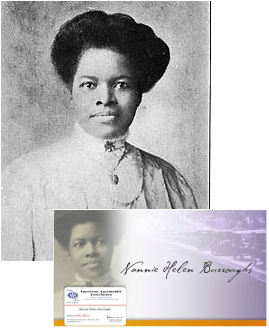 It will go down in Project ENRICH lore as one of the most impressive events of the program's history. On Saturday, February 11, 2012, Project ENRICH students joined members of the Greater Prince George's County community to pay tribute to Washington, D.C.'s Nannie Helen Burroughs for Black History Month. She has a school and a street named after her in the Nation's Capitol. Held at the Charles H. Flowers High School in Springdale, Md., the program featured Project ENRICH students and officials from the American Automobile Association, who presented Ms. Burroughs with her AAA membership card posthumously.

Nannie Helen Burroughs was denied a membership in 1930 during a time when she was outspoken to the White House about the treatment of African Americans in the United States. U.S. Army Col.(Ret.) James Wyatt, a member of Gamma Pi chapter and a 62-year- member of the Fraternity, researched Nannie helen Burroughs' histiory and arranged the program.

AAA's presentation of the membership card during the program was the highlight of a moving afternoon. It was covered by local and national media. Another highlight was Project ENRICH stduents themselves, who took to the stage to talk about their experiences in Project ENRICH in the context of the values and ideals Nannie Helen Burroughs espoused as a civil rights advocate, religious leader and educator in the early 1900s.

Photos and Videos below from this historic event

Voices of Project ENRICH ... from the Black History Month Program