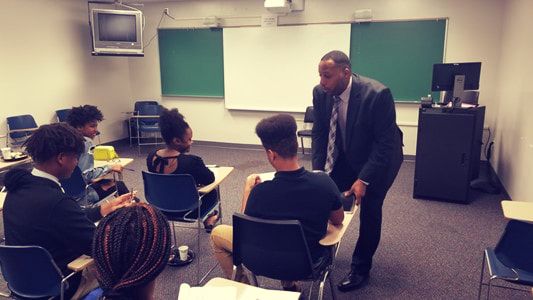 ​Though 2020 may have given us visions of dark despair, with the turn of a new fraternal year there yet shines the promise that a bright future is indeed ahead of us. One place that light is illuminating from is the ever important program Project ENRICH. Project ENRICH has been one of the most monumental programs in the history of Gamma Pi’s chapter as a servant to the youth of Prince George’s County, MD. It has been a beacon of hope for many families in this community since 1985. Yet this year there is a different glow to the star that is Project
ENRICH. A different energy exudes with the program this season.

Enter Bro. James Riley Jr, (9 S’15 Gamma Pi, LM#8864, DLM#49) Project ENRICH’s enthusiastic new Director and Committee Chair for the 2020-2021 fraternal year. Bro. Riley brings with him a wealth of mentoring experience both as a mentor and as someone who has been the beneficiary of good mentorship. Most importantly he brings a deep passion and love for helping young people grow and develop.

“They say it takes a village to raise a child, well that concept was true for me,” says Bro. Riley, as he reflects on his humble beginnings as child growing up in the LaPlata area of Charles County, MD. “I didn’t know I was poor because I always had what I needed.” Bro. Riley attributes the fact that his football coaches and his friends fathers aided in showing him how a man should conduct himself and giving him all he needed to become a successful contributor to society. It was that type of mentorship that drove him to attend college and play football at Norfolk State University and it was that type of mentorship that ignited his passion for helping other less fortunate young people work towards achieving their dreams. “This is what I love to do.”

Bro. Riley has been involved with Project ENRICH serving under the direction of Bro. Willie Hines since his initiation into the Gamma Pi Chapter in 2015. “I knew exactly what I wanted to do if I was fortunate enough to cross into Omega and I said to Bro. Hines ‘I wanted to work with the mentoring and tutoring program, I want to work with Project ENRICH.’” Even before Bro. Riley’s initiation, he has been heavily involved in mentoring, tutoring and coaching and helping to shape the lives of young people. Unbeknownst to him, it was through a form of mentorship that led him to becoming a member of the Omega Psi Phi Fraternity, Inc. Mentoring has always been a relevant part of his life.

Now that the leadership of Project ENRICH has been passed from Bro. Hines to Bro. Riley, Riley has a great opportunity to truly put his fingerprint on the future of this program. He does not enter into leadership with just a love and a passion for mentoring however, Bro. Riley has a plan and a huge vision. “I want to see Project ENRICH go global. I want other chapters of the Omega Psi Phi Fraternity, Inc. to see what we do and use our blueprint and incorporate it into their own programs. There is so much we have already done and so much we can do to help these young people get access to a college education or trade at the least amount of cost possible. Project ENRICH needs to be around the world.” Bro. Riley believes that with a well thought out and organized plan, the support and participation of the chapter, and the right virtual platforms, the opportunity to go global is a realistic possibility and an endeavor that should be pursued.

He created this acronym after considering the reason why the word ENRICH was always capitalized. “Bro. Roland Byrd, who started Project ENRICH at Gamma Pi back in 1985 stated that Project ENRICH is always elevating, always rising above the call.” And ‘calling’ is the perfect word for Bro. James Riley. In speaking with him about Project ENRICH, one can clearly see that this is not just a passion or something he enjoys doing but this is a true calling for him.

When asked what support he needs from the Brothers of Gamma Pi, he states he is looking for additional help from the brothers for the anticipated growth and partnerships with other committees. He would also like to take advantage of the resources that the brothers may have access to. “Many brothers have relationships with influential people at various schools and universities and other organizations that we would like to leverage to help students get accepted into school and most importantly get access to various scholarships and grants.”

Bro. James Riley has a Bachelor’s Degree in Accounting from Norfolk State University and a MBA in Management from Strayer University. He has served in the United States Army and he presently works for Homeland Security. Though his calling is for mentorship, Bro. Riley is also a master on the grill as well. He is married with three young sons.

Bro. Riley mentioned an interesting quote from his grandfather. “My grandfather always said Faith without work is Dead. You have the Faith and we will provide the Work. There are two sides of this coin Faith and Work, neither side should lack. In order to be Successful, have Faith as if everything depends on God, but Work like it all depends on you.” The interesting point about this quote Bro. James Riley stated is it actually comes from the New Testament Book of (drumroll) …James. Interesting coincidence. How’s that for calling.